While reading Jori Finkel’s piece in the New York Times on Machine Project’s LACMA invasion, I was struck by something that Margaret Wertheim said:

I don’t know of any city other than L.A. with so many feral groups.

Now while she was referring to the Los Angeles art scene, this sort of applies to the tech scene here as well. There are plenty of folks trying to make this city relevant when it comes to tech. A streamlined, less paunchy version of Silicon Valley that does yoga and drinks wheatgrass. And that’s fine. They can keep doing that. But to lift a quote from Chuck Palahniuk’s Fight Club, “Sticking feathers up your butt does not make you a chicken.”

I’m not really talking about them tho. Honestly, the most interesting shit that is going on in this sprawl is on the fringe. Groups like Dorkbot SoCal & Betalevel and meetings like Mindshare are where people are doing the really sexy, fun, creative stuff. Well, the stuff that’s worth paying attention to at least.

Seeing as how I’ve helped foster it along, why would I exclude BarCampLA from that tiny (and rather incomplete) list above? Well, first of all, my ego isn’t that big.

Most importantly tho, it isn’t one of those feral members of the fringe anymore. Sure, it may have been a bit of a wild dog in the past, but as time goes on, it has become domesticated. With well over 300 people wandering in and out over two days and the schedule slowly seeing product pitches, SEO talks and social media chatter dominating the landscape, it’s sort of losing some of its original charm.

Think I’m crazy for saying that? Consider BazCampLA. A “mad science only” event, their plan is to get together about two weeks before the next BarCampLA to make sure their technical talks are well tuned and ready for the big show. From the chatter that I’ve seen, they’re sort of worried that this will be seen as a condemnation of BarCampLA. A middle finger to its participants and the Los Angeles tech scene as a whole. But totally I get what they’re trying to do — and I admire their goals.

Frankly, I hope the BazCampers either take the schedule at the next BarCamp over by force or they end up building a framework for a better event. Like one that would make BCLA obsolete and allow me to take a vacation. Lord knows that I could use the rest… ;) 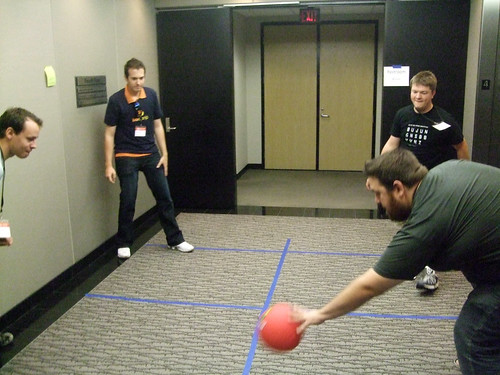 BarCamp + Four Square = EPIC WIN!
Seriously, watching everyone revert to 4th grade was totally awesome. People dove for the ball to keep from getting out and were actually ignoring the Xbox 360 to wait in line and play.
It was so much fun that I’m thinking we ought to have a pick up game soon. Possibly next weekend.  Were that the case, would anyone be up for that?

The Importance of Being Earnest

A few days ago Michael Arrington dropped a piece of his Silicon Valley into my LA by throwing an absolutely massive party down here. And after talking things over with friends and spending some time thinking about the events of the evening I’ve realized that they are two great tastes that don’t really taste all that great together.

Now, don’t get me wrong. It was great to get some recognition from TechCrunch‘s ringleader that LA is a viable technology player by having him throw a 1500 person event with an open bar and Perry Farrell DJ’ing. As far as I’m concerned, that was totally welcome and downright awesome. Seriously, thank you for that.

But I have a modest request to send your way, Mr. Arrington. If you ever plan on throwing one of these gigantic tech mixers here again, please go ahead and leave the drama at home. Because I don’t know how the folks up your way do things — but your actions on Thursday don’t give me a very encouraging idea of how you handle your business and personal relations. One of the things I love about Los Angeles is the fact that the events that get thrown by the locals are — for the most part, anyway — pretty unpretentious and (to borrow a line from Andrew Warner) more about community than conflict.

A little over a year back, we had an issue with some BarCampLA attendees being problematic. And we’re talking far worse than just being annoying to the event organizers. Excessive and open alcohol and drug abuse, making female attendees feel uncomfortable and badgering speakers to the point where talks turned into one way shouting matches made some attendees leery of coming again. We had a few people who were ruining the community because they couldn’t behave like adults.

Instead of banning the people outright from our events and making a scene tho, we issued a code of conduct. If you couldn’t follow it, you were asked to leave and that was that. Yeah, it’s sort of a hippie thing to do — but it worked. The rules kept a tight enough rein on the people causing problems to the point where they either stopped coming or calmed down considerably. Sure, there were folks who didn’t want the people to have the opportunity to show up at all, but excluding people is not in the spirit of BarCamp.

Of course one could argue that the TechCrunch/PopSugar party was a ticketed, private event.  Still, you would think that a quick search over the Excel spreadsheet before it was printed and a few emails to let people know they’re not welcome could have spared everyone involved a bunch of unnecessary bullshit.

Anyhow, if you need any tips for throwing an event down here Mike, just let me know. Even if you don’t want to deal with the likes of me, I can put you in contact with people who can help you save a bit more face and perhaps make you come off better than you managed to the other night.

I’m not a total curmudgeon about the evening by the way. The pre-event dinner at Palms Thai (props to Mike Prasad for putting that together), the people I hung out with at the party and the two afterparties that organized themselves via Twitter were fun as hell.  What’s more, they boiled themselves down to the people that make this community great.  So while the main event left me a bit drunk, cranky and in need of a shower, the rest of the night left me wonderfully full of hope and optimism for what we’re cooking up here.  Our potential is limitless — and we’re just getting started.

If it’s seemed a little quiet around here, it’s because I’ve been helping plan the latest installment of BarCamp in Los Angeles along with Crystal. A lot of hard work has gone into getting this off the ground and I’d love it if y’all could come check it out. If you know me, you probably know what BarCamp is already — but if you don’t let me fill you in a bit. BarCamp is a totally free, ad hoc conference going on both Saturday and Sunday (Nov. 3 & 4) that covers the whole gambit of tech (and even some non-tech stuff) going on in both LA and around the world. There’s a mix of really great people, really awesome (free) food, a keg, a DJ, presentations and other fun stuff planned for the weekend.

For more info on the venue and the plan for the weekend, check out the BarCampLA wiki and feel free to post any questions you might have about going in the comments here if you’re on the fence. Despite the fact that we’re sort of in crunch time right now — and I’m juggling planning this as well as a handful of other things — I’ll do what I can to not leave anything unanswered.

P.S. Father of the GPL, Richard Stallman is apparently gracing us with his presence. That, plus a visit from Dan Kaminsky ought to make this weekend plenty interesting.

Heads up, SF peeps! This weekend I’ll be driving up to the Yay Area for WordCamp to rep both DreamHost and Preshrunk in an official capacity.

As it stands, I’m driving up Friday night and crashing out at Frazier’s secret headquarters somewhere in the East Bay. Since I don’t like being part of the problem — or paying for parking — I’ll be taking as much public transit as I possibly can. So it’s handy that I managed to stumble upon these handy iPhone related Muni apps that use NextBus information. Now all I need is a native looking (i.e. pretty) trip planner and I’m all set. So… Does anybody know of one off the top of their heads — or am I stuck using 511.org over EDGE?