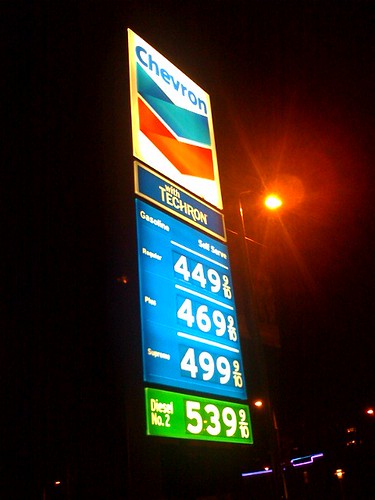 It’s gas prices like these (spotted last night on the corner of Cahuenga and Franklin in Hollywood) that make me really glad that I take the Red Line to work.

It should be noted that I filled up on Monday in northernmost Orange County for $4.13 for regular — so this station is likely gouging a bit due to its proximity to the freeway and tourist spots — but that doesn’t really matter. This sign feels like a fairly decent indicator of what’s to come.

Now if you’ll excuse me, it looks like it’s time to go price out a bicycle…

The Importance of Being Earnest

A few days ago Michael Arrington dropped a piece of his Silicon Valley into my LA by throwing an absolutely massive party down here. And after talking things over with friends and spending some time thinking about the events of the evening I’ve realized that they are two great tastes that don’t really taste all that great together.

Now, don’t get me wrong. It was great to get some recognition from TechCrunch‘s ringleader that LA is a viable technology player by having him throw a 1500 person event with an open bar and Perry Farrell DJ’ing. As far as I’m concerned, that was totally welcome and downright awesome. Seriously, thank you for that.

But I have a modest request to send your way, Mr. Arrington. If you ever plan on throwing one of these gigantic tech mixers here again, please go ahead and leave the drama at home. Because I don’t know how the folks up your way do things — but your actions on Thursday don’t give me a very encouraging idea of how you handle your business and personal relations. One of the things I love about Los Angeles is the fact that the events that get thrown by the locals are — for the most part, anyway — pretty unpretentious and (to borrow a line from Andrew Warner) more about community than conflict.

A little over a year back, we had an issue with some BarCampLA attendees being problematic. And we’re talking far worse than just being annoying to the event organizers. Excessive and open alcohol and drug abuse, making female attendees feel uncomfortable and badgering speakers to the point where talks turned into one way shouting matches made some attendees leery of coming again. We had a few people who were ruining the community because they couldn’t behave like adults.

Instead of banning the people outright from our events and making a scene tho, we issued a code of conduct. If you couldn’t follow it, you were asked to leave and that was that. Yeah, it’s sort of a hippie thing to do — but it worked. The rules kept a tight enough rein on the people causing problems to the point where they either stopped coming or calmed down considerably. Sure, there were folks who didn’t want the people to have the opportunity to show up at all, but excluding people is not in the spirit of BarCamp.

Of course one could argue that the TechCrunch/PopSugar party was a ticketed, private event.  Still, you would think that a quick search over the Excel spreadsheet before it was printed and a few emails to let people know they’re not welcome could have spared everyone involved a bunch of unnecessary bullshit.

Anyhow, if you need any tips for throwing an event down here Mike, just let me know. Even if you don’t want to deal with the likes of me, I can put you in contact with people who can help you save a bit more face and perhaps make you come off better than you managed to the other night.

I’m not a total curmudgeon about the evening by the way. The pre-event dinner at Palms Thai (props to Mike Prasad for putting that together), the people I hung out with at the party and the two afterparties that organized themselves via Twitter were fun as hell.  What’s more, they boiled themselves down to the people that make this community great.  So while the main event left me a bit drunk, cranky and in need of a shower, the rest of the night left me wonderfully full of hope and optimism for what we’re cooking up here.  Our potential is limitless — and we’re just getting started.

If you’re gonna call me more than half a dozen times from an unlisted number over the course of 10 minutes, please have the dignity to leave a fucking message. If you really wanted to talk to me, you would have the common decency to do that at the very least.

Instead of trying to build an iPod killer, why don’t companies try to build something that defines a new space for a change?

Why Is WordPress So Sexy?

Psst… I fidgeted with the layout on Preshrunk.

Actually, all I really did was find a really sexy WordPress template and tweaked it to my liking — but I’m pretty sure I’ll keep this design up for a while. At least until everyone and their brother starts using it on their own sites.

When I showed the new layout to Matt, he remarked:

Matt: WP templates out there are so good
Matt: it seems stupid to custom design anything

And you know what? I’m inclined to agree. I only spent half an hour switching up some colors in CSS and fixing a few grammatical errors in the post data at the bottom of the page before I considered it ready. To compare, when I launched the site using Blogger, I spent a few hours tweaking someone’s port of Kubrick to get it exactly the way I wanted it.

Now I’m not trying to say that WordPress is easier to use — or even really any better — than Blogger is. Both of them have their shortcomings. But please don’t think that I’m knocking Blogger. I was a paid Blogger Pro user back in the day. And up until a several months ago, I thought I’d be using it forever. So needless to say, I have plenty of love and respect for them.

What I think I’m getting at here tho is that the WordPress community has quite a few more passionate designers than the general Blogger community does under its belt. Sure, Google can afford to hire Zeldman, Cederholm and Shea — but they don’t even use Blogger to run their own sites. Can you even name one resource for Blogger templates other than the default ones that are provided for you? I know I can’t.

The people who are releasing all of these beautiful WordPress templates on the other hand, actually manage to use the software on a pretty regular basis. They know how to hack their way around the extensive template available to get some pretty amazing results. Sure, the code may occasionally be a tad bit hellish to read thru when you need to do a quick tweak, but the designers are passionate about WordPress and really manages to show in their designs.

Think about it… When was the last time you saw a Blogger design get ported over to WordPress? Yeah, I don’t seem to remember that happening either.

Damn. I’m getting off on a rant here… Sorry about that. I could go on for a bit longer, but I’ll spare you all. Just go give the new Preshrunk a peek, okay? Cheers!